We have put together the International Draughts Rules NIGERIAN VERSION (10 X 10 Board) for the benefit of NEW PLAYERS.  This is also to remind ALL PLAYERS of the Standard Rules of the Game, so that we ALL will be guided by the same RULES AND REGULATIONS.


The International Draughts Rules (Nigerian Version) Manuals are two Free E-books which are in two versions viz: (1)  Comprehensive Rules which includes Illustrations and (2)  Abridged Rules which is without illustrations.

You could also receive the Two Manuals (E-books) automatically which you can Download, Share or Print by simply sending your E-mails to:  rules@Draftstechniques.com
(Please use the above e-mail to request for the manuals only - as it is automated).

NOTE: Once you send your request for the Rules Manuals and you did not receive it after some time, kindly check your "Spam Folder" or "Bulk Mail" as the case may be.  We are sure it will be there.  If after checking, you still did not receive the e-book, kindly let us know by sending your email to: info@draftstechniques.com.

WHAT IS DRAUGHTS GAME

International Draughts as played in Nigeria, Ghana and Indeed in some African Countries, is a table Board Game for two players on a 10 x 10 Board, using 40 Round or Square pieces called "Seed" (20 Seeds for each player) on a "Draughts Board" with 50 Black and 50 White Squares (The Black and White Squares could also be in other colours).

The game is known as Draughts in United Kingdom and Checkers in the United States of America.


The "Draughts Board" is positioned on the laps of both players that are seated or sometimes the board is put on top of a table. The Central Line or Longest Line (diagonal) has to be at the right hand side of both players.

The seeds (20 seeds (Pieces) for each player) are arranged on the black squares and all moves are made on the Black squares.  Both players will take turn by being the first to make a move with every new game. Lots are drawn to establish the first person to start.

You can learn the games COMPREHENSIVE RULES WITH ILLUSTRATED PAGES by clicking ((Download/Print the Comprehensive Manual Here).

You can also see the ABRIDGED RULES (Download/Print the Abridged Manual Here).

However, here is a summary of the main rules:

1.   Capturing of a piece (seed) is compulsory (both Forward and Backward)

2.   When a player has two (Multiple) places to capture (eat-up) during playing, THE PLAYER AS A RULE IS FREE TO CAPTURE TO ANY PLACE HE SO DESIRE.  The capture of the largest number of pieces (seeds) is NOT OBLIGATORY.

3.    When a Seed (Piece) succeeds in reaching the Backline of its opponent (or the Promotion Line), it is crowned a “King” by placing an already captured seed (piece) on top of the seed that has reached the Backline.  This is to distinguish a King from an ordinary Seed.

4. King moves any number of step(s) forward or backward (diagonally) during playing and when eating (capture) provided that the place it wants to go is a straight line (diagonal) with the previous place it stood in a flying fashion.  Whenever a King (crown), during a capture, meets, either or the same diagonal or on one of the perpendicular diagonal, a seed of the opponent behind which are one or more empty squares, he is obliged to pass over that second piece, if needed turning a corner towards the seed that can be eaten-up, even a third etc, the king will finally stop behind any empty space he so desire of the last seed captured on the same diagonal.

Kindly help us with your feedback.

Popular posts from this blog 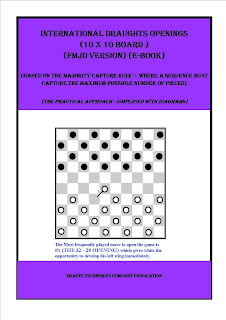 This presentation on the International Draughts Openings (10 x 10 Board) is aimed at the proposed integration of the Mirrored Board Version (Where the Dark Bottom Square is to the right of both players) as played in Nigeria, Ghana and some other African Countries, with that of the World Draughts Federation (FMJD Version) (Where the Dark Bottom Square is to the left of both players) FOR THE BENEFIT OF ALL PLAYERS THAT USE THE MIRRORED BOARD.
We hereby introduce to them the "Mirrored Notation" as the major tool to align the notations of the Mirrored Board to that of the FMJD Version.  This will open All Mirrored Board Players to thousands of books and magazines to enable them study hundreds of thousands of games and positions to catch up to world level.
To test run this integration, we have chosen the "Openings of the Game"  We therefore dedicate this presentation to All International Draughts Players for both the World Draughts Federation (FMJD Variant) and The Mirror…
Read more 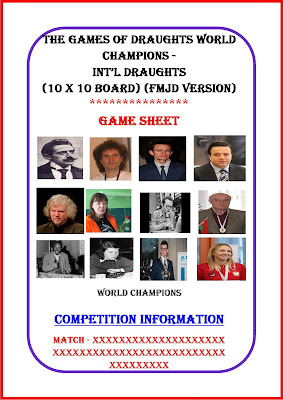 This post is USED FOR INFORMATION PURPOSE ONLY and is dedicated to the exciting games of DRAUGHTS WORLD CHAMPIONS OF INTERNATIONAL DRAUGHTS (10 x 10 BOARD),WHICH IS BASED ON WORLD DRAUGHTS FEDERATION (FMJD) RULES (i.e. Based on the majority capture rules).  The games are inclusive of games from International Masters (MI) and International Grand Masters (GMI) (BOTH MALE AND FEMALE CHAMPIONS) to serve as a guide and inspiration to players.

Players are no doubt familiar/or had viewed the games of the various world champions in VIDEOS and OTHER FORMAT(S).  We present these exciting games in a format we would like to call "GAME SHEET FORMAT" which is an unorthodox way to view and study these Highest Level Games by means of a step by step diagrammatic representation of the moves of these VARIOUS TOP TOURNAMENTS AND  WORLD CHAMPIONSHIP GAMES in a way whereby the Openings, through the Middle Games and The End Games (in short, the whole spectrum of the game) could be VIEWED AND STUDI…
Read more